Samsung unveils Galaxy S4; will be available from end of April 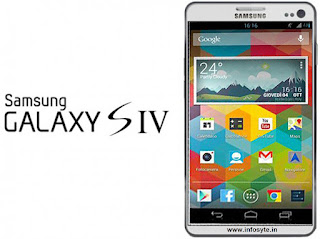 Korean top handset maker Samsung has launched the Fourth Generation of its Galaxy range called as Galaxy S4. This phone comes with a new imaging features as well as Gesture Control technology.

But the prices of this device has not been unveiled. It is estimated to be about $200 USD in US. This will be launching in the month end of April across 155 countries globally with 327 mobile operators.

The S4 phone is based on Android Jellybean. It features a five-inch full HD super AMOLED touchscreen, 1.9 GHz quad-core processor, 13 megapixel back and 2MP front camera & supports both 3G and 4G networks.

The new feature added in the Galaxy is 'Smart Pause' - by which users can pause a video just by looking away from the screen, while the 'Smart Scroll' -  tool allows them to scroll the browser or emails up and down without touching the screen.

It Also has 'Air View' feature which allows users to hover with their fingers to preview the content of an email, image gallery or video without having to open it by just gesturing in air.