What is Kai Po Che ? What does 'Kai Po Che' mean ? Movie Review 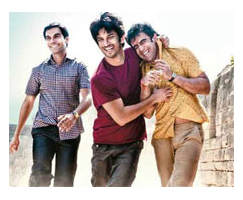 The film title Kai Po Che is originally a Gujarati phrase that means "I have cut the kite" which refers to a kite competition, where one of the competitors uses his kite to cut off another competitors kite and yells "Kai Po Che!"

This film is directed by Abhishek Kapoor based on Chetan Bhagat's novel 'The 3 Mistakes of My Life', with music of Amit Trivedi and lyrics by Swanand Kirkire.
Starring: Sushant Singh Rajput, Raj Kumar Yadav, Amit Sadh, Amrita Puri.

The story revolves around three friends who want to start some business. Among which one friend is an Ex-district player who was a victim of politics in the cricketing space, the other one is the nephew of a Hindu politician who funds their business and third one is a nerd who is the mastermind behind starting a sports shop and also a sports academy. The story deepens into the earthquake and Gujarat riots and how that affects their life.
Filming began in Vadnagar in Mehsana district of Gujarat along majority of scenes canned in old Ahmedabad and continued further in Porbandar, Sabarmati, Diu. A scene featuring the trio was shot at Hatkeshwar Mahadev temple. Reportedly, Sushant Singh Rajput had to undergo four months cricket training under two coaches to fit into the book adapted character of 'Ishaan'. A cricket match sequence was shot at a Sabarmati stadium in Gujarat.
Source: Wikipedia
Three of Movie Hit tracks:
Released on 22nd February'13 the estimated earning are:

Director Abhishek Kapoor says to the media that we are happy with the success we are not aiming for Rs.100 crore mark.
This movie is a paisa vasool movie. Simply awesome...love it - Audience